Take me to Manchester 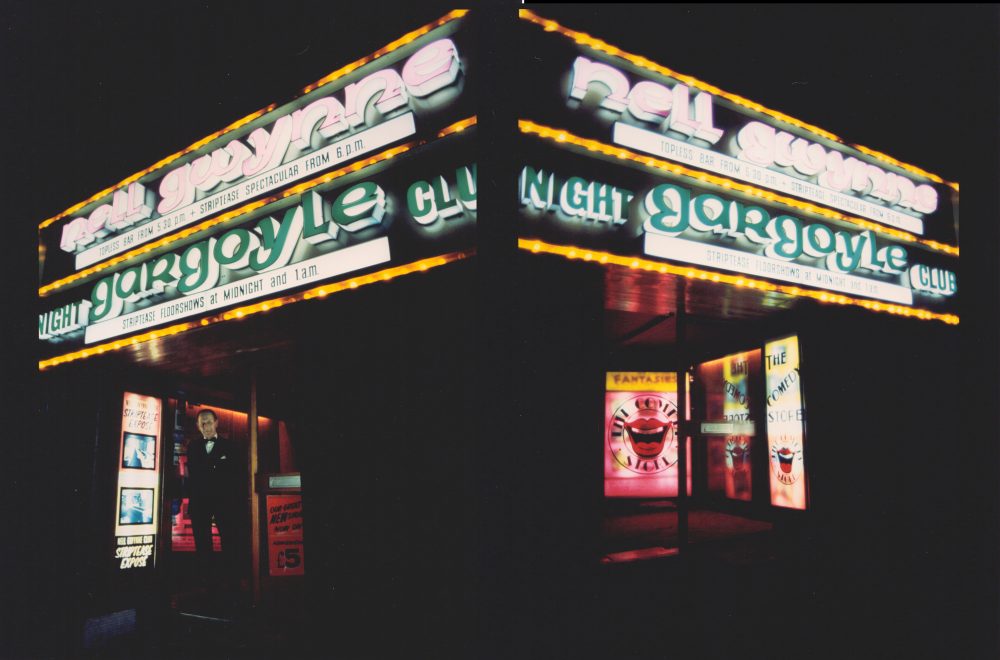 In May 1979, Don Ward, (Founder, CEO and Executive Producer) opened The Comedy Store in the old Gargoyle Night Club in Dean Street, Soho. He had been inspired by a trip the previous year to see the new comedy clubs in New York and L.A. They were producing observational comedy and poking fun at the political scene and the Establishment. This was so refreshing and stimulating, his aim and dream was to re-create the same in London. As an ex-comedian and now a producer/owner he wanted to present something different in his venue and a complete evening of ‘alternative’ comedy seemed ideal. 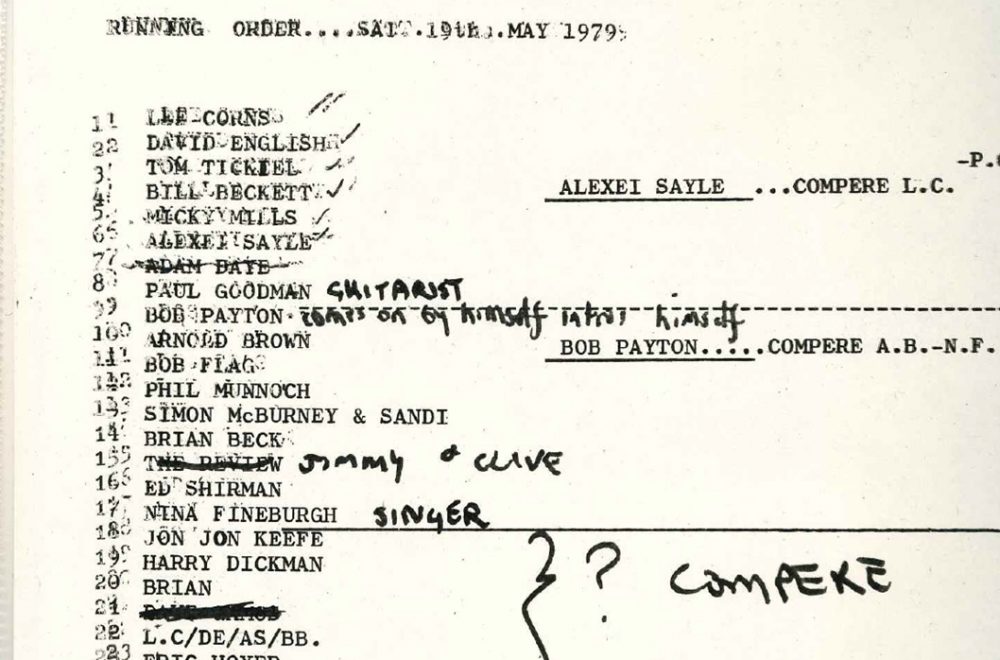 The running order from The Store's opening night!

The Plan was to keep the night club running as it was, Monday thru’ Friday and switch to comedy on Saturday. His initial problem (and there would be many) was where the ‘new’ comedians were coming from? So adverts were placed in various publications: The Stage, Evening Standard, Evening News, Jewish Chronicle, Grocer’s Gazette, Builders Weekly, Punch and University magazines, saying - “Are you trapped in a boring 9 to 5 job when you are a very funny person who wants to become a comedy star”…………..” If your answer is ‘yes’ to that question, then contact us - The Comedy Store in Soho and become part of our Comedy Revolution - if you have the talent, we will help you to become a Comedy Star.” Auditions were held and a 150 people showed up! (YES, 150 people). The first person in the queue was Alexei Sayle, who presented as angry, at odds with everything of authority (if it didn’t make sense) and wonderfully against Maggie Thatcher &amp; Co. He became the host for the shows for the first three years!

There were so many to audition, Don made the auditions the show, putting on 30 comics to perform 5 minutes each, with a Gong to tell them when it was time to get off. As there was a strip club on the floor above (Don owned that too!) finishing at 11pm, the comedy started at the bewitching hour of midnight! In the show was French and Saunders, Mayall and Edmundson, Peter Richardson and Nigel Planer, Keith Allen, Andy de la Tour, with Alexei hosting. With perhaps 20 others, the show quite often would go on to 4am.

In the new politically aware environment of the early 80’s, comics with racist, sexist and out-dated jokes were often gonged off quickly making room for performers of the new “alternative” genre, whose material was considered fresher and more innovative. The above-mentioned names ticked these boxes and Clive Anderson, Robin Williams, Paul Merton and Ben Elton were soon added to that august list. These were crazy, amazing formative years and The Comedy Store, smack bang in the middle of decadent Soho reigned supreme, as there was nothing like it in the whole of the UK. 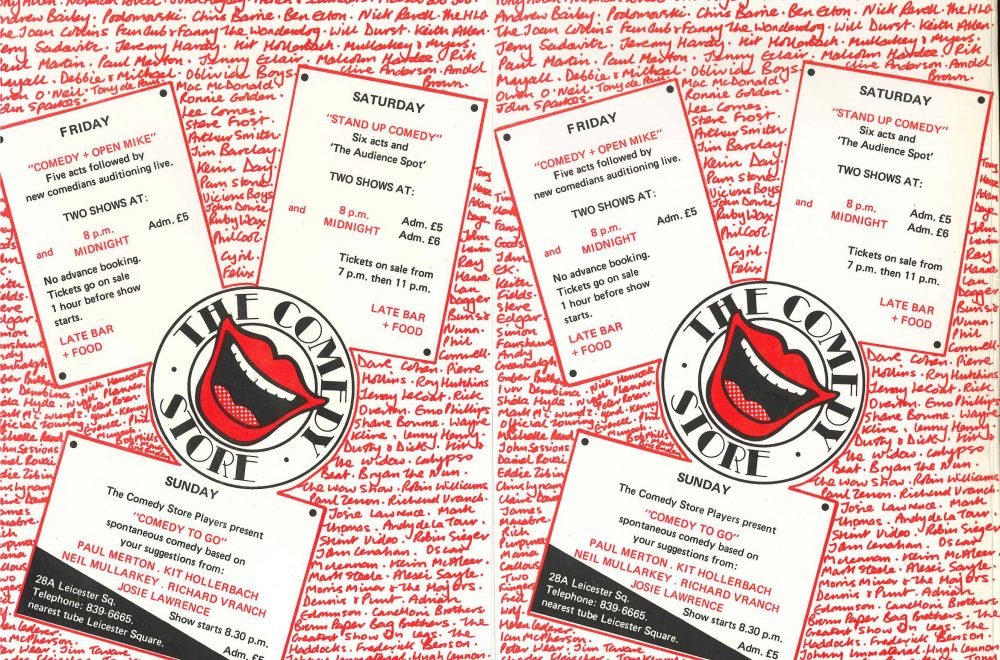 "The store has always been one of my favourite clubs in the world, stepping out on that stage still gives me goose bumps...." - Jack Whitehall
Jack Whitehall 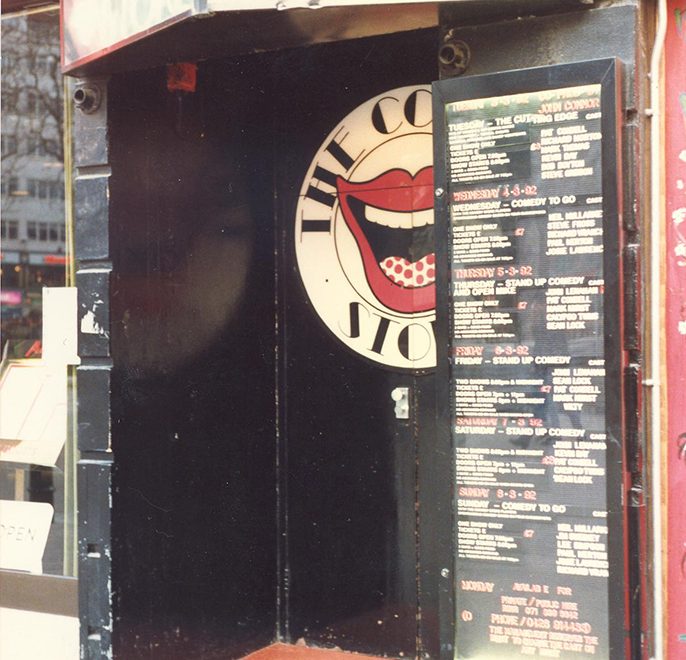 At the end of 1982, the lease of the club expired, the landlord offered Don the freehold of the whole building (69/70 Dean St) for the princely sum of £300K!!!! As he couldn’t find that kind of money (the bank manager said to Don - “…. how can the bank advance you that level of money on a business that just tells jokes?” The irony is that The Comedy Store became in a few years, a phenomenal success and spawned an industry that stretches everywhere in the UK. So here he was with a name and business and no home, frustrating to say the least. We all need a bit of luck in life and Don’s piece of luck arrived at the expense of someone else’s bad luck! The Subway Night Club, 28 Leicester Square lost its licence owing to various misdemeanours happening in their club late at night, and though an Appeal was made, it took a long time to go to Court, so Don took over the ground floor and presented comedy shows on a Saturday night. Eventually the Subway Club closed and Don took a chance and applied to Westminster Council for a licence to carry on the business of ‘stand up’ comedy ONLY and the Justices said YES. (Luck). If the Dean Street Comedy Store hosted the ‘creative years’ - the Leicester Square premises hosted the ‘formative years’. The stand-up shows started to run on Thursday, Friday and Saturday each week. 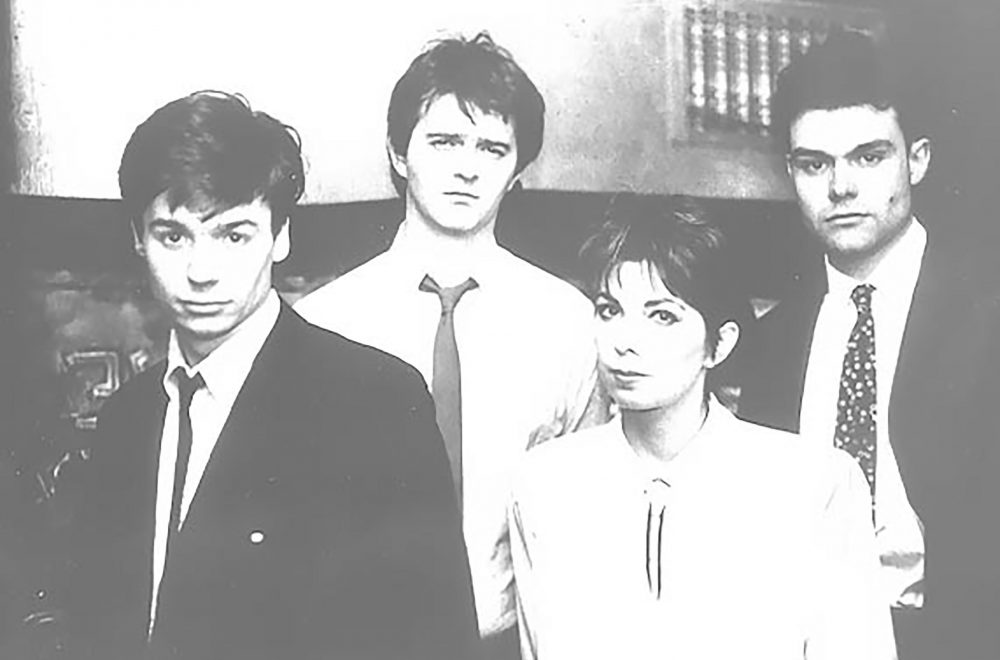 In October 1985, a young Canadian actor/comic approached Don with an idea for an improvisation show with a cast of six actors and actresses with the idea of taking suggestions from the audience and making a comedy show from those suggestions. His name was Mike Myers (yes that one, who was later to become a Hollywood star). The show was a success and became a weekly Sunday night show and later on a weekly Wednesday show. Paul Merton, Josie Lawrence, Neil Mullarkey, Richard Vranch, Lee Simpson, Jim Sweeney, Dave Cohen, Kit Hollerbach were the nucleus of the original team and some of them are still performing at The Store 35 years later.

Don and John Connor [Comedy Editor of the (now defunct) weekly listings mag City Limits] were having a drink at a comedy Charity gig in the Hackney Empire one Bank Holiday Monday evening. John voiced an idea for a topical show with comedians taking suggestions from the audience. With Alexei Sayle, satire had been a major feature of the original Store - John wanted to build a whole show around it. When 'The Cutting Edge’ (later to be re-titled ‘The Edge’) launched in the summer of 1990 there was no show in the country where stand ups commented on the news! It beat TV's 'Have I Got News For You' by some six months. This would be a joint production between John and The Store, so was born, a weekly Tuesday night show which is still running 30 years later!

During this period at the Leicester Square venue, lots of American comedians were beginning to show up in the UK as some tv channels were using them as guests on their shows. Robin Williams, Will Durst, Greg Proops, Ruby Wax, Emo Phillips, Dennis Leary, Bill Hicks were all making their way to The Store to ‘try out’ their material, resulting in some great highs - and some very low lows! Also, new British comedians were emerging such as Arthur Smith, Julian Clary, Harry Enfield, Rob Newman, David Baddiel, Jack Dee, Mark Lamar, Eddie Izzard, Tony Slatterley, Steve Coogan, Jo Brand, Lee Evans, Sean Hughes, Frank Skinner and Lee Hurst.

So then the only night of the week left free was Monday. Don remembered the early days when anybody could phone in and get a chance to perform on The Store’s stage and realised that opportunity was now no longer available. In the early days, we used a gong to tell the auditioning comedian that his/her time was up, so the gong was brought back for an open mic style show and re-named ‘The ***’king Gong Show (from what the would-be comedians called the Gong when they were gonged off!) – now abbreviated to The King Gong show – or the Gong show - held on the last Monday of every month. So those days of giving anybody a chance are back, but now applicants need to email, not ring in.

The other three Mondays of each month are used for Registered Charities’ shows or Podcast, Radio, TV recordings. So there you are, a show every night at 7.30 and later shows at 11pm on Friday and Saturday. Nine shows a week! - the only comedy venue in the UK that is open virtually every day. As with the Dean Street (100 seated), Leicester Square (215 seated), most nights were sold out and customers were being turned away! So, we had to move to a bigger place. But we had to be in the W1/SW1 area.... but where were we going to find somewhere that held 400?

The hunt for basement premises (ground floors are too expensive) commenced early in 1992. In the early 90’s the UK was coming out of a recession and Don had learnt that opportunities to expand only happen during and just after a recession. This is where ‘lady luck’ came to his aid as Haymarket House (a block of offices on the corner of Coventry Street and Oxendon Street) had empty restaurant premises at ground floor and basement. They had been empty for a couple of years and he found out that Whitbreads Brewery were going to take both floors and open a TGI Friday restaurant on the ground floor but they didn’t want the basement.

The basement was over 6,000 sq. ft. (perfect size for seating 400) a deal was struck for a 25 year lease and we opened early 1993. We closed the Leicester Square premises on the Sunday with the Comedy Store Players, the very last performer was Paul Merton, many a tear was shed as we said goodbye to The Comedy Store Mark II, but hey! - we were moving 150 metres SW to a new and bigger home.

The next night we mounted a Grand Charity gig and the first performer on was Paul Merton! - supported by the likes of Jack Dee, Eddie Izzard and a host of other performers previously mentioned. We have been there ever since entertaining over 3,000 people a week from every English-speaking part of the world and now on some Saturday and Sunday afternoons, we host French, Romanian, Danish, Lithuanian and Belgian comedians working in their languages of course! Comedy is truly International 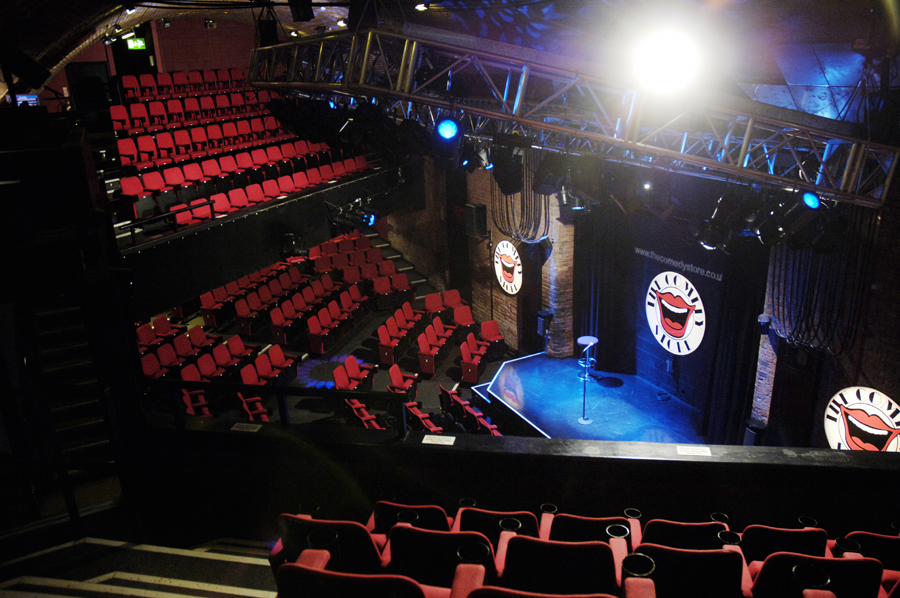 We’d been told that people travel over 100/150 miles to see a show at The Comedy Store, so Don decided to open one in Manchester. The search for premises started in 1998 and the following year he found the perfect place - Deansgate Locks, alongside the canal and very close to where the famous music club The Hacienda used to be. The auditorium seats 500 and an adjacent bar holds 400, plus a canal side restaurant/performance space for 100. It will blow your mind when you visit it! Also this year, Manchester will have its 20th Anniversary Gala Show on Monday, 14th September. Do yourself a favour and buy a ticket.

In 2019 The Comedy Store celebrated its 40th Birthday with a star-studded Gala show, raising money for Teenage Cancer Trust. The line-up was a who's-who of UK comedy with acts such as Michael McIntyre, John Bishop, Jack Dee, Paul Merton, Omid Djalili, Dara Ó Briain and Alexei Sayle who all returned to celebrate this milestone in the club's history.

The Store continues to be a hotbed of comic talent where you can see the stars of today and tomorrow perform. As well as established circuit acts, we also give open spots to up-and-coming acts and help them develop their skills.

So there you have it, London or Manchester - it’s your choice as long as you want to see the Best, the Original and Newest Comedians On The Planet, then it's The Comedy Store for you.